For many leaders it’s very easy to view social media as a distraction, with many either ignoring it entirely or paying someone else to handle their social media accounts for them.

The problem with this type of mentality though is that it completely ignores the fact that social media isn’t another fad, and it’s definitely here to stay. According to a survey by Social Media News, they estimate that over 60% in Australia alone have a social media profile, with the number of active profiles worldwide reaching 2.34 billion. In today’s hyper-connected world it’s considered strange if you don't have a social media profile.

The truth is the days where CEOs and executives being shadowy figures that operate in the background are over. People, customers and employees alike, want to be able to connect with the people behind-the-scenes and social media provides leaders with that opportunity.

Without further ado, here are the top 3 reasons why your leadership team needs to be on social media. 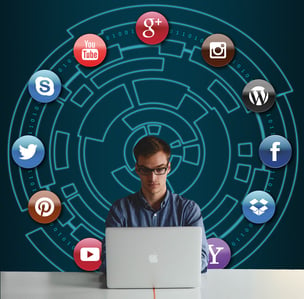 It Builds Trust and Authenticity

In their 2017 Consumer Content Report, Stackla found that the modern customer craves authenticity over anything else. With an overwhelming 90% of millennial's saying that authenticity is one of the most important factors in whether or not they trust a brand. This is where social media comes in. Social media is more than just a platform where you can keep updated about what’s going on with your friends and family. It’s also a place where you can have a conversation with all kinds of people from all walks of life. By being active on social media and participating in these conversations, leaders are actually building up that sense of trust and authenticity with their customers. In fact, according to this report, over 80% of customers are more likely to trust a company whose leadership are active on social media. People want to feel like they’re doing business with more than just a faceless organisation, but a brand with a real human face. Having your leadership team spend a mere 15 minutes a day on social media can achieve just that.

It turns out that it’s not just customers who care about your online presence, it’s your employees too. Just like customers employees don’t want to feel like they’re working for some shadowy individual but a real human being. But more than that, they want to feel like they’re working for someone that’s genuinely inspirational, someone that they would feel proud to call their leader. In a recent survey, four out of five employees believe that CEOs who engage on social media are not only better leaders, but better equipped to lead a modern business. Social media gives leaders a way to communicate with their employees outside of the workplace. The most savvy CEOs, like Elon Musk or Richard Branson, will also use their social media channels as a way to show off the great workplace culture of their businesses and highlight select staff, or events within the company. Not only does this inspire current employees and reinforces the idea that they’re working for an organisation that cares, but it also attracts new talent who only want to work for the best.

Get Ahead of Crises

While it’s true that social media can be a place that fans the flames of crisis and criticism the same can also be said of it’s ability to help the leadership get ahead and handle crises as they happen. Nowadays in the time it takes to create and publish a press release a few well-placed tweets can effectively achieve the same, if not better, outcome. Social media allows the leadership team to keep a finger on the pulse to see and understand what the public are saying and form the appropriate response. By being able to respond to any crisis as quickly as possible, it also gives the leadership the ability to address concerns before they spiral out of control. Time and time again it’s been proven that CEOs who are active on social media and are willing to speak authentically gives themselves, and their companies, a certain amount of protection against potential crises. As well as being an incredibly effective platform in handling any questions or objections that are thrown their way.

This is where you give the visitor a brief introduction to both this blog and your company. Keep it short. More →

We would love to hear from you. Drop us a line and let's discuss how we can help you.