How did Donald Trump Win? – a marketer’s viewpoint

Like him or hate him, what Donald Trump has done over the last 17 months has been extraordinary. He has ascended from a businessman/reality TV star to President-elect of the most powerful nation on earth against every prediction and against all odds. So how did he do it? As a professional marketer of over 30 years, here is my take on the messages, methods and marketing strategies he used to get to the top.

Now there are many angles I could take. We could talk about ‘post-truth’, Oxford Dictionary's 2016 Word of the Year, meaning ‘relating to or denoting circumstances in which objective facts are less influential in shaping public opinion than appeals to emotion and personal belief’. Don’t be fooled by a new word. This has always been the case. Appeals to emotion have always been influential in peoples’ decision making, and most of the time more influential than facts themselves. Do you spend all that money on a new BMW because of its objective facts? It always surprises me when people come up with this type of thing as some form of new reality. This new reality is the same as the old reality and has always been so.

We could talk about how people received more news on social media from fake news sites than from real news sites and suggest that this influenced the election. If it did, it was minor at best. The Pew Research Centres Journalism and Media research suggests only 4% of people have a lot of trust in news from social media. The only thing that this could have done is reinforce to people that you can’t trust the media. Only around 20% of Americans trust the news they get from local and national news outlets. This lack of media trust and perceived bias in the media (74% believe that news organisations tend to favour one side of politics) are some of the reasons that Donald Trump seemed to draw such large crowds to rallies. Although he may have overstated his crowd numbers (post-truth?) they were very large by any measure. When I saw TV footage of people going to his rallies the most common response from individuals when asked why they were there was “I just wanted to hear what he has to say”. Does this mean that they don’t believe they will hear what he has to say via the media?

There are so many things which could have been a factor in this amazing feat of marketing but I will discuss only four: Brand Positioning, Target Market, Communication and Emotional Triggers. 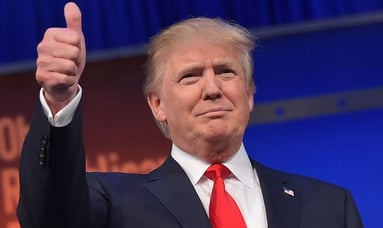 The problem for most politicians starting out is that nobody knows who they are. Thus, they do not have any brand recognition or brand positioning. With Donald Trump, this was not the case. Was there anybody in America who had not heard of Donald Trump? Seen his TV shows, seen the Trump name on buildings and more? Trump already had significant brand recognition. He also had a brand personality with which people could identify. I was having breakfast with a friend of mine, in real estate, well before the election and I asked him what he thought of Donald Trump. Very simply he replied, “He’s a salesman”. This hit the nail on the head! Yes, that is exactly what he is. That is exactly what people see and that is exactly what people expect. Now you might consider that people want more than a salesman for their president and this might be true. However, the interesting thing about professional sales people is that people buy from them. No matter how salesy you might think their approach, they are successful because people buy from them. Trump was selling himself as president and he knew this. He built his brand position around his deal making ability and did not waver.

You will rarely see any politician target their audience so well. Trump needed to convince swing voters in significant states to turn his way. What anybody else thought did not matter. He spoke to his core target market about issues which were important to them with an attitude of ‘to hell with what anybody else thinks’. Those who were outraged at what he said were not going to vote for him anyway. It takes someone who knows their market very well and is very focused to whether the political storm which this created and not waiver from the path. The ‘professional politician’, who has spent their lifetime trying not to offend anyone, could not possibly have achieved this and did not understand this. That is why you saw so many people from his own party dis-own him. Trump, being a salesman, does not try to sell people who are not going to buy from him. They are irrelevant to him and he does not waste his time worrying about them.

There are two main elements of marketing communication outside the standard channels, which I clearly saw during the campaign. They both stemmed from his major problem. He didn’t have a lot of money to promote. Let me clarify that statement. He was going to get out spent by his competitor by 2 to 1. The Clinton campaign had roughly double the funds of the Trump campaign. This meant two things, he needed to use the media well to propagate his message and he needed a very clear and concise message. Please recognise how tough this was as much of the media was certainly not on his side.

Now, in a way I have been in this situation before when launching a consumer product. We didn’t have a lot of money and we needed to make a big splash. Thus, we targeted the consumers we wanted very tightly and became controversial in our message to get their attention. What others thought did not matter. We needed to cut through the clutter.

So how did Trump do it? He had some very clear and simple messages, that were also controversial. I will mention only two of them.

With one of the major issues around the world today being immigration, this message said it all. It reminded me very much of the message of the ex-Australian Prime Minister, Tony Abbott, with “We are going to stop the boats!” It is, in fact, precisely the same message for a different geographic situation. Did the Trump campaign review the Abbott campaign when crafting their message? It does not really matter where it came from but what it said did matter. It said “We are going to get tough on immigration.” I truly believe today that many who voted for Trump do not actually think he is going to build a wall. That is not relevant. It was a clear, concise, concrete (excuse the pun) statement that established his position on immigration, and that it was vastly different to his competitor. The real bonus was that it was controversial. This meant the media played the message over and over, and over again. This was free advertising of one of his key policy positions.

2. We are going to drain the swamp!

I love this statement for its simplicity and its ability to communicate the key message that everyone else in politics is part of the swamp. This positions Donald Trump well outside the establishment, positions his opponent as well inside the establishment and gives the reason why so many on his own side of politics dis-own him. It is perhaps the most well-crafted statement of the campaign. It also provides controversy in so many ways, meaning the media a going to repeat it for him.

In the post ‘post-truth’ world, emotional triggers rule. As in the pre ‘post-truth’ world. Emotional triggers have always ruled! I said to colleagues and friends prior to the election that the only chance Donald Trump had to win was to trigger the emotion of anger in voters. People often view anger as a bad emotion but that is simply not the case. Anger is the emotion which causes action. When you get angry you do something about it. In the USA election system voting is not compulsory. Thus, you need to encourage people to get off the couch and actually vote. Anger is perhaps the best emotion to achieve this outcome. The number of voters in the 2016 US election was about the same as the 2012 election but the mix was obviously different. Was it people changing their vote, or did non-voters make the effort to vote and regular voters stay away? There is no statistical analysis that could confirm or disprove this but I put it to you that the triggering of anger, for a variety of different reasons (and not necessarily the ones you might think, see Jon Stewart on President-elect Trump) was a major reason Donald Trump is now President-elect of the USA.

There are learnings for anyone in marketing or attempting to market their own products/services from this extraordinary marketing achievement. Brand Positioning, Target Market, Marketing Communication and Emotional Triggers are key mechanisms available to anyone and can be considered for any marketing marketing strategy. How could you use them? Want to create a marketing strategy as good a the Trump campaign but don't know where to start? The Marketing Strategy workbook is designed to bring all the aspects of marketing together so that your business stands out. Download by clicking here.

So how will the Trump Presidency go? I expect 12 months of relative chaos but then again Trump is particularly good at selecting people. So perhaps this will be his next goal, whilst he continues to sell the US people on what he wants to do and indeed on what he will do instead of the promises he made during the campaign. I suspect he will be successful again, at least in the latter part of that statement.

This is where you give the visitor a brief introduction to both this blog and your company. Keep it short. More →

We would love to hear from you. Drop us a line and let's discuss how we can help you.